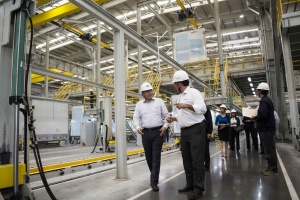 Press Release. Tijuana.- The new Hyundai plant in Rosarito will be completely inaugurated next October; this project signifies an investment of $85 millions and a creation of 2,000 direct jobs.

On a tour accompanied by top officials of the company, the Federal delegate of the Ministry of Economy in Baja California, Rufo Ibarra Batista, recognized the interest of the Korean corporation for choosing the region to expand their operations.

Shortly after starting operations, the plant is already producing 70 boxes for trailers with a goal to produce 100 boxes per day in the next month, in which the completion of the company’s new offices is expected.

During the visit, corporate authorities explained to the Federal Delegate of the Ministry of Economy about the processes that are performed, and addressed some inhibitors that would optimize productivity and to which the official promised to negotiate with the respective units.

“These inhibitors are electric power plants related and roads for the purpose of moving the finished product, so these efforts will be made with the National Center for Energy Control (CENACE), the Federal Electricity Commission (CFE) and with the Ministry of Infrastructure and Urban Development”, said Ibarra Batista.

On his behalf, Hyundai’s Director of Projects and Public Relations, Fernando Ruiz, expressed his gratitude for the Secretary of Economy visit, Ildefonso Guajardo Villarreal and the commitment made to consolidate the project even more which will benefit Baja Californians.

“It is important that this investment is as successful as planned so that the corporation turns more toward the entity and promotes new investments,” abounded; it is expected that these actions will strengthen the automotive industry in Baja California because of the promotional efforts of the three levels of government.