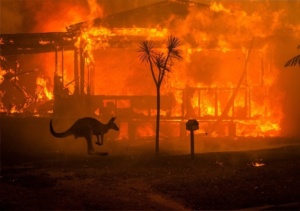 For several weeks, thousands of strong images about the situation in South Australia have been circulating in social media about forest fires, which have severely affected the natural environment of millions of animal species, mainly kangaroos and koalas, which abound in that region.

A widely disseminated report from the University of Sydney estimates that 480 million animals have been affected since the wildfires began in New South Wales, in Australia since September 2019. But the recent report reveals that it could be up to one billion species, as the fire continues.

South Australian Prime Minister Steven Marshall declared in a statement: “We are just beginning to accept the extent of the destruction of the fires on Kangaroo Island. Tragically, it has been confirmed that two thousand lives have been lost. More than 100,000 hectares of land have been affected by fires.”

“We face many of the same firefighting challenges in other countries. We have used their experience in the past and we welcome the opportunity to help back,” said United States Forest Service fire director Shawna Legarza. While 150 firefighters, many of them veterans, are already traveling to Australia to join forces in the face of this catastrophe.

The origin of this chain of fires is unknown at the moment, but environmental experts point out that it is a consequence of climate change, given the severe droughts that have remained in Australian territory during this summer season over the southern hemisphere.