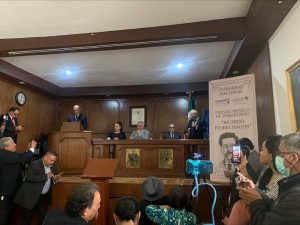 Journalist Eva Joaquina Guerrero Ríos, from Sinaloa, was unanimously elected as President of the Board of Directors of the Federation of Mexican Journalist Associations, FAPERMEX; José Arturo Aguirre Bahena, the communicator from Morelos, was appointed as head of the Honor and Justice Surveillance Committee.

XX National Congress of the Federation of Associations of Mexican Journalists, FAPERMEX, and the National College of Graduates in Journalism, CONALIPE had its National Assembly in Mexico City on Dec. 2nd.

The National Assemblies of both national groups hosted a solemn ceremony and deliver the “Ricardo Flores Magón” Journalism award.

“For all of our silent heroes who gave their lives in the service of the nation and its state, who with their pen, recorder, and video camera in hand, made the news and discovered the truth, but who unfortunately was cowardly assassinated, serve these humble words of gratitude, and in honor of each one, that their death will never be in vain, because we carry their legacy in our hearts and thoughts, to fight for them, and make it clear to the authority that we continue and will continue to be in mourning, until the Mexican State, its rulers, and politicians understand that if a journalist or communicator does not have guaranteed freedom of expression in a country; it is a country that is dying, dying and deforming,” President Eva Joaquina Guerrero Ríos said in her remarks.

The “Ricardo Flores Magón” Mexico Journalism Award, established in the Constitution of FAPERMEX, in May 2002 in Ixtapan de la Sal, State of Mexico, is renewed since, in addition to the gender and special awards, it will now be awarded by career to journalists who have completed 50 years or more of professional practice.

The Federation of Associations of Mexican Journalists, FAPERMEX, and the National College of Graduates in Journalism, jointly determined to exalt the year dedicated to Ricardo Flores Magón, the precursor of the Mexican Revolution, 100 years after his sacrifice by awarding the Lifetime Achievement Award to journalists who have completed 50 years or more in professional practice.

A group of journalists from Baja California are among the top awardees of a national award list for outstanding work in 2022. Beyond Borders Gazette Director Ellie Burgueño won an award for the article “Behind The Accent”.