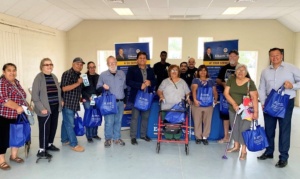 “We were incredibly grateful for the opportunity to partner with the Golden State Water Company and Comite Civico Del Valle to provide two hundred Imperial County families and seniors in need with turkeys for their Thanksgiving dinner. It is heartwarming to see the abundance of generosity illuminated during the holiday season and would like to recognize all the organizations and volunteers working to rectify our community’s shelter, clothing, and food disparities year-round,” said Assemblymember Eduardo Garcia.

This year marked the 5th Operation Gobble collaboration Assemblymember Eduardo Garcia has completed with the Golden State Water Company. Turkey deliveries began at Calipatria City Hall, where City officials and the Fire Department helped to distribute turkeys to local families pre-identified by the City based on need.  The Heber Senior Center served as the second distribution location, and the remainder of the turkeys were given to Kennedy Gardens Elementary School as prizes for their Turkey Trot Run student winners.