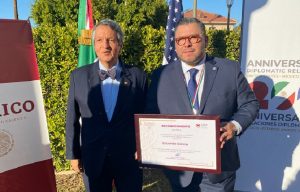 In a special ceremony held at the Mexican Consulate in Calexico, Assemblymember Eduardo Garcia accepted the Ohtli Award, the highest honor bestowed by the Government of Mexico to individuals or organizations that have worked to empower the Mexican diaspora and helped to “open the path” for new Mexican American and Hispanic generations.

Mexican Consul Tarcisio Navarrete Montes de Oca spoke about Garcia’s legislative career and his work to maintain a good relationship between Mexico and the U.S.

Assemblymember Garcia’s family was present at this event.

“It’s truly an honor to share this space with high-level officials from the Mexican government as well as Imperial County, and more importantly, with my family and closest friend being here. To me, receiving this award is a testament to the work we have done over two decades in collaboration with very critical individuals, entities that recognize the need to work together in a binational form,” Garcia said.

The Ohtli award is administered by the Secretary of Foreign Affairs. It is given once annually by individual consulates and consists of a medallion, silver rosette, and diploma. The name of the award comes from the Nahuatl word which means “road” or “path.” The medal depicts an Aztec god cutting grass with a machete. The symbolism of the name alludes to the idea of opening a path for others.

The first award was given out in 1996. The award is one of the highest honors given to citizens living outside of Mexico. The Ohtli Award recognizes individuals who have aided, empowered, or positively affected the lives of Mexican nationals in the United States and other countries.