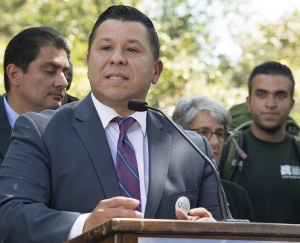 The Urban Greening Program is financed by Cap-and-Trade revenues; a funding source that was preserved this year through Garcia’s AB 398.

“It is exciting that our hard work in Sacramento, advocating for more equitable climate investments, has translated into real results and real dollars flowing into our community. This year, we were able to level the playing field so that disadvantaged areas not only become competitive but ensure that they are prioritized for these funds,” stated Assemblymember Garcia. “It is no secret that parks are a particular passion of mine. I couldn’t be happier to see these Cap-and-Trade dollars at work improving air quality and providing much needed park access where there was none.”

El Centro Mayor, Cheryl Viegas Walker exclaimed, “This is fantastic news! El Centro is grateful to receive funding from the California Natural Resources Agency for Plank Park. The funding will allow us to create a beautiful green space to encourage families to be active together and reduce greenhouse gases. A win-win for our community. We are also grateful for our talented staff who put together the grant application, as well as Assemblymember Garcia for his advocacy and leadership.”

The North Shore Community Park is a five-acre site designed by local residents with the assistance of Desert Recreation District and Kounkuey Design Initiative. It will be the first and only active greenspace in the community of North Shore. The procurement of this grant was no slam dunk. In fact, the application was initially denied. Upon hearing this, Assemblymember Garcia immediately joined an “all hands on deck” effort which resulted in a favorable appeal and significant win for eastern Coachella Valley families.

Desert Recreation District’s General Manger, Kevin Kalman, said “we are thrilled that the park project was selected for funding and we are grateful to all of our partners for their hard work to make our application competitive”.  Kalman went on to say “currently under construction, the additional funding will allow for elements of the park, previously scaled back for budgetary reasons, to be included thereby further enhancing the health and environmental benefits of the project.”