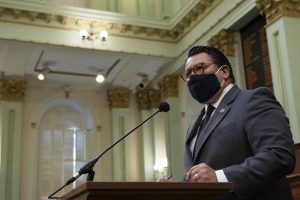 “Kevin E. Kelley was a dedicated public servant, a fierce advocate for our Salton Sea, and an extremely talented musician. We extend our heartfelt condolences to his family and friends, as our entire State Assembly pays tribute to his legacy of service. Throughout his career, Mr. Kelley stood up to defend Imperial County, taking on critical water and agriculture issues to shape and improve our community. Kevin Kelley advocated on behalf of the restoration and mitigation of our Salton Sea. His dynamic presence will be deeply missed as we continue to carry out the work he began,” said Assemblymember Eduardo Garcia.

Kelley was employed by the Imperial Irrigation District on October 3, 2006, and later appointed general manager on May 17, 2011. Immediately following his appointment he oversaw the district’s centennial celebration that took place in July 2011. Throughout his tenure, he took great pride in his service to the district and played a critical role in resolving difficult and contentious issues.

As a journalist, he was a columnist and editor at Imperial Valley Press.

Among his achievements as IID general manager, it includes the repowering of the El Centro Generating Station’s Unit 3 in October 2012. The execution of a Memorandum of Understanding with Imperial County in October 2013 that prioritized Salton Sea restoration efforts.

The signing of a significant agreement with Metropolitan Water District for joint participation in a binational conservation project. The filing of a petition in November 2014 urging the State Water Resources Control Board to honor the state’s commitment to restore the Salton Sea as memorialized in the ensuing 10-year plan.

Authored the Envision 2020 report to capture strategic objectives for the district, which was later used as a foundation for the Strategic Plan adopted in 2016.

Completion of a 30-MW battery energy storage system project in October 2016. Negotiated a first of its kind 30-megawatt community solar project with Citizens Energy whose entire energy output will be dedicated to serving the needs of all of the district’s low-income ratepayers.

Dedication of a state-of-the-art fleet shop at district headquarters in December 2017. Settlement of antitrust lawsuit against the California Independent System Operator to promote local renewable energy development and protect the district’s balancing authority in 2018.

Transitioned from land fallowing to convert to a suite of efficient water management policies that have allowed the district to live within its apportionment, resulting in 250,000 acre-feet of storage water. Developed management partnerships along with the Lower Colorado River Basin States to address on-going water supply issues.