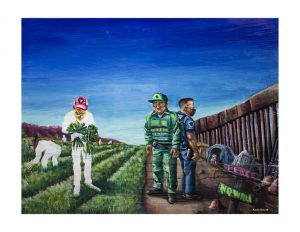 The re-opening exhibition at the Steppling Art Gallery on San Diego State University’s Imperial Valley campus will invite audiences to reflect on how the last 18 months have transformed the valley.

The exhibition’s theme, “Crisis y cosecha,” (translates to “harvest of crisis”) will feature artwork from over 20 valley artists. The exhibition is a collaboration of Steppling Art Gallery and the Calexico-based Imperial Valley Equity & Justice Coalition (IVEJC) and is co-sponsored by the Associated Students at SDSU-IV. An opening reception for the exhibition will be held on Thursday, September 23, from 5-8 p.m., following COVID-19 protocols of the SDSU-IV campus.

This exhibition expands on themes of a virtual show co-hosted by Steppling Art Gallery and IVEJC during the summer 2020 COVID-19 wave. That show Imperial Valley Hope and Resilience, sought to commemorate the collective hardship of the summer, while also highlighting the resilience of a community that experiences chronic crises that pre-date the pandemic. In Crisis y cosecha, artists look toward the future with a kind of optimism forged from the rise of national and local social movements and public engagement that emerged from the pandemic, building on a long history of local struggles on both sides of the border.

“There will be no ‘post’ pandemic return to normal. In the last year and a half, we have lived not only through a global pandemic, but also the country’s largest racial & social justice movement, historic shifts in national and local politics, and the scorching realities of climate change,” says Luis Flores, from IVEJC, one of the show’s organizers. “The exhibition invites artists to reflect on the transformative potential that comes with experiencing overlapping crises and traumas.”

One of the local artists featured will be Karla-Lisseth Hernandez Muñoz. Her painting, “The Sold Land in Calexico City,” depicts anonymous agricultural workers in a corridor of crops mirrored by law enforcement overlooking the dirt corridor along the US/Mexico barrier. “The white space is a metaphor about the difficulty of seeing farmworkers and migrant workers visually and recognizing legally their rights …” reads her painting’s description.

In addition to paintings, drawings, and poetry, the exhibition will also feature installation-based art. A wall of “wheat-pasting” artwork by Calexico artist Janneth Aguirre will accompany a large multi-pane mural by SDSU student artists reflecting on the struggles for bilingual education in the State of California, a commentary on linguistic inclusivity that remains relevant.

Other artworks in the exhibition were created in social movement actions, including 20 crosses produced during last spring’s encampment alongside the US/Mexico barrier in Calexico, commemorating the 13 migrants who lost their lives outside Holtville in March 2021, and sculptural work from Mexicali Resiste, a movement that has challenged the privatization of water in Mexicali since 2017.

“It is exciting to re-open the gallery doors for in-person programming with such a great exhibition featuring the work of local artists, activists, and creatives. Immediately after we organized the Imperial Valley Hope and Resilience online exhibition almost exactly one year ago, I knew I wanted to follow up with an event where some of the participating artists could gather and show their work (in physical space)” says Luis Hernandez, director of the Steppling Gallery and an art instructor at SDSU-IV and IVC. “Unfortunately, the pandemic and other external forces still limit the movement and presence of bodies in space, but I’m glad that within the current restrictions, we were able to organize this first in-person show.”

All participating artists will receive an honorarium with funds provided by the Latino Community Foundation. Some of the artwork will be for sale by the artists.

The exhibition will be on view through November 4, 2021. Steppling Art Gallery hours are Thursdays from 6-8 p.m. The gallery is located on the SDSU-IV campus.