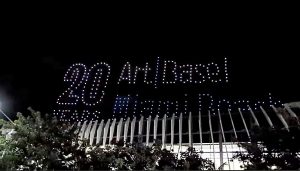 Art Basel celebrated its landmark 20th-anniversary edition in Miami Beach, signaling two decades of growth and impact by Art Basel as a cultural cornerstone in South Florida, across the Americas, and beyond.

The 2022 edition – Art Basel’s largest to date in Miami Beach – brought together 282 premier galleries from 38 countries and territories, including 25 galleries participating in the fair for the first time, as well as multiple international exhibitors returning to the show after a brief hiatus.

Art Basel continued to draw an attendance of unparalleled global breadth and caliber.

Reinforcing the fair’s commitment to showcasing exceptional art from the region, nearly two-thirds of this year’s participating galleries had gallery locations in North and South America, with an especially strong presence of galleries from the United States, Mexico,

In celebration of its 20th anniversary, Art Basel launched a Gift-Giving Campaign with a lead donation to the STEAM + program, whose mission is to bring active artists into the seven public schools of the city of Miami Beach.

Founded in 2018, the program engages 5,000 children and teenagers every year and is administered by The Bass Museum of Art, working in conjunction with many other local institutions, including Pérez Art Museum Miami, Miami City Ballet, New World Symphony, The Jewish Museum of Florida-FIU, Young Musicians Unite, and The Wolfsonian-FIU. UBS, Ruinart, La Prairie, Chateau D’Esclans, Valentino, Knight Foundation, and DRIFT are generously supporting this philanthropic campaign. The fundraiser will run until the end of 2022, at which time the total sum collected will be announced.