Arrests Increase at The U.S.-Mexico Border 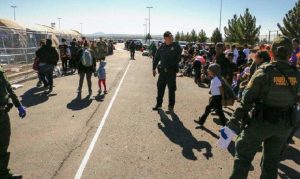 U.S. border authorities arrested 210,000 migrants attempting to cross the border with Mexico in March, the highest monthly total in two decades and underscoring challenges in the coming months for U.S. President Joe Biden.

The March total is a 24% increase from the same month a year earlier when 169,000 migrants were picked up at the border, the start of a rise in migration that left thousands of unaccompanied children stuck in crowded border patrol stations for days while they awaited placement in overwhelmed government-run shelters.

During the same period in 2021, ERO removed an average of 937 aggravated felons per month, the highest level ever recorded and the greatest public safety impact since ICE began collecting detailed criminality data. 46 percent of ICE removals from February – September 2021 were of serious criminals overall (persons convicted of felonies or aggravated felonies), compared to 17 percent during CY 2016 and 18 percent during CY 2017-2020.

On January 13, just one week before Biden’s inauguration, more than 3000 people departed Honduras and El Salvador for the United States. That number grew to approximately 7000-8000 one week later.

On January 16, Guatemala and Mexico deployed the military to their borders, in an attempt to stop the migrant caravan from transiting through their countries on the way to the United States to no avail.

On January 20, 2021, soon after his inauguration, President Biden halted the construction of Trump’s Mexican border wall, ending the national emergency declared by the Trump administration in February 2019. Early during President Joe Biden’s tenure, a surge in migrants at the U.S. border stirred controversy. According to a 2021 Politico report, Republicans expected before Joe Biden took office that there would be a border surge at the start of 2021 (due to seasonal patterns and regional crises) and coordinated to make it a central issue in the lead-up to the 2022 mid-term elections.

The number of migrants arriving in the United States from Central America had been rising since February 2021. The United States Border Patrol reported an increase in encounters with unaccompanied children from the month before. The reported 5,858 encounters in January to 9,457 in February constituted the largest one-month percentage increase in encounters with unaccompanied children since U.S. Customs and Border Protection began recording data in 2010.