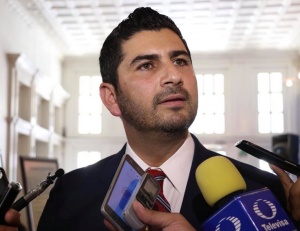 Mexicali, B.C.- Sanction with the same penalties of crime for tax fraud to anyone who benefits unduly with the application of the TAX reduction and ISR proposed Alejandro Arregui with initiative presented at the State Congress.

The legislator recognized the President of Mexico Andrés Manuel López Obrador for signing the decree of fiscal stimuli and called on employers to do their part, by adhering to the decree and applying it correctly lower the prices of products and be more accessible to the population.

“The decree states that TAX should go down to 8%, this fiscal stimulus should never be used for those who have more, but meet the objective: which means that the employer only transfers 8% to the final consumer,” he said.

He stressed that there is the possibility that companies that adhere to the decree are only seeking their benefit, therefore paying 8% and charging 16%, so he made the proposal to remain in the law and punish those who seek their own benefit.

Finally, he called on federal legislators to update the law, so that the decree is actually applied correctly to the benefit of thousands of Baja California citizens.