Breaking News
Home / LEGAL / ARMING OUR EDUCATORS: IS IT EVER A GOOD IDEA?

ARMING OUR EDUCATORS: IS IT EVER A GOOD IDEA?

Given the proliferation of violence in the schools, especially the number of mass shootings that have occurred, such as the one in Florida, the question has arisen as to whether we should arm our teachers and other school officials. After all, no one wants this to ever happen again. Ideas for combatting mass shootings and violence in our schools range from allowing students to carry weapons, arming teachers and school staff, to providing armed police officers at every school.

The question, however, is: Would any of these plans make a difference? In the most recent shooting in Florida, an armed security guard was present but retreated instead of firing back, perhaps because he was not armed enough, or perhaps out of fear. His handgun was certainly no match for the assault weapon possessed by the assailant.

Recently, on social media, a friend suggested the following solution (perhaps jokingly): We should place a 100 percent tax on all gun sales, then use the money from this tax to buy more guns and fund jobs for people required to work in order to collect welfare, who would then guard school entrances and hallways while armed with these firearms. The guns would be checked out from the school office each morning and returned at the end of each day. The workers who participate would get a free lunch, free transportation via school bus, and if needed, they could sleep at the school at night. 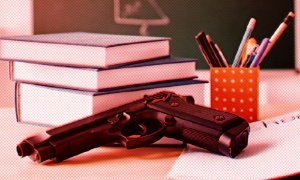 While seemingly absurd, and perhaps suggested out of sarcasm rather than any seriousness, this idea illustrates how desperate and conflicted members of our society have become in the wake of so much mass violence in our schools. Many teachers cannot imagine having a firearm in their classroom; others relish the idea.

Another idea that is growing in popularity is restricting who can own a firearm. After all, the assault weapon used in the recent Florida shooting was legally obtained. Furthermore, neighbors, teachers, classmates, acquaintances, and local authorities were aware that the assailant in that shooting was armed and potentially dangerous. The problem is that, in most states, there are no legal procedures that would allow people with such knowledge about an individual or even law enforcement officials, to ask a court to order the immediate confiscation of his weapons. However, five states, one of which is California, have enacted “red flag laws” that empower relatives and close friends, as well as law enforcement officers, to ask judges to issue gun violence restraining orders. These orders could possibly avert gun rampages such as the one in Florida.

Lawmakers in other states are considering similar legislation. In Maryland, red flag legislation has been introduced which would allow individuals such as immediate relatives and others close to the individual, as well as law enforcement, to ask courts to order temporary confiscation of a person’s weapons based on credible evidence of a threat. The individual may challenge the order in court, thus ensuring his participation in the legal process.

In addition to mass shootings, gun-inflicted suicides may also be prevented through these red-flag laws. Although organizations such as the National Rifle Association have come out in opposition to these types of laws, the laws preserve due process rights and address specific at-risk individuals in an evidence-based process, not gun owners as a class. Such legislation would seem to respect the Second Amendment while safeguarding communities from the trauma of gun violence.

While arming our school officials (even just on a temporary basis) may send a message to would-be mass killers that they will be met with a ready and able defense system, there is no evidence that this would thwart such massacres, especially since the gunmen often kill themselves or accept the likelihood of being killed at the end of the rampage. Instead, removing guns from those who show signs of such propensities may thwart such horrible tragedies.