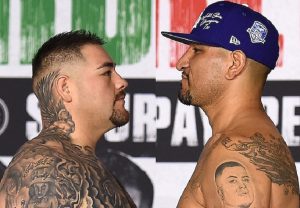 Imperial Valley native Andy Ruiz Jr. got back into the win column, but it was a lot more difficult than he might have expected.

“Chris is a veteran and a hard puncher,” Ruiz said. “We did what we had to do tonight. We got the victory that we wanted. I was at my lowest point and now I have to climb the ladder again. I’m thankful for the victory and I’m ready to move onto the next.”

Judges had it 117-110, 118-109, and 118-109, all in favor of Ruiz. After Ruiz looked razor-sharp with his jab in the first round, Arreola caught him with a punishing right to the temple for a knockdown in the second. In the third, Arreola badly hurt Ruiz with a left hook, which nearly delivered another knockdown.

Arreola appeared to injure his shoulder and didn’t throw his left as much in the second half of the fight. Against a motivated and well-prepared Ruiz, that was a huge problem.

Trainer Joe Goossen had worked with Arreola on combinations that could take advantage of Ruiz’s tendency to throw wide punches. He first hurt Joshua by throwing a right hand over the top from another county, but against a heavy hitter, it’s always a dangerous tactic.

But Reynoso showed why he’s the master, as he tightened Ruiz’s defense and straightened his punches. He wasn’t leaving the kinds of openings that Arreola expected.

“When you go down, you just have to climb back up. That’s exactly what I did. I got dropped, but I got up and got the victory,” Ruiz said. “I could have done a lot more. I couldn’t really find my distance, but some of that was Arreola doing a good job. I could have kept my hands up better, but I just need to get back in the gym and stay busy.”