AMLO ANNOUNCES PROCEDURES TO REOPEN THE BORDER WITH CALIFORNIA 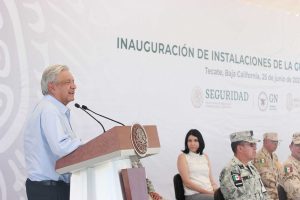 On his first day of the tour in Baja California, President Andrés Manuel López Obrador revealed that he had instructed Foreign Minister Marcelo Ebrard to manage with the state governments of California and the federal government of the United States to reopen the border.

This as a consequence of the extraordinary effort made by the State Government and the Health Sector in Baja California, it has already been possible to immunize its population ages 18 years and older against Covid-19, which earned the president the widest recognition of Governor Jaime Bonilla Valdez, as well as on behalf of the Secretary of Security and Citizen Protection, Rosa Icela Rodríguez.

This occurred at the formal inauguration ceremony of the National Guard barracks, located in the El Hongo area (Luis Echeverría neighborhood), in the La Rumorosa Municipal Delegation, in the municipality of Tecate, where the President of the Republic arrived, after having been in Mexicali during the morning.

Andrés Manuel López Obrador thanked and recognized Governor Jaime Bonilla Valdez for the coordinated work he has maintained with the Federation, especially on the issue of Covid vaccination, for fulfilling the commitment to vaccinate the 18-year-old population ahead, with the installation of 40 modules.

Governor Bonilla Valdez told the head of the nation that these new facilities of the National Guard are aimed at strengthening peace and security in the country, and “will establish new hope” in this Baja California area, “the state that most he wants it.”

She took advantage of the presence of the Secretary of Security and Citizen Protection of the Government of Mexico, Rosa Icela Rodríguez, to thank her for the visit she made last week to the State, to strengthen the operation of what was the intense Covid vaccination campaign in people of 18 years on, in which the entity led at the national level, thanks to the support of the federal government.

In his speech, President López Obrador highlighted that given the coordination with the state administration, he decided to support Baja California with the shipment of more than one million Johnson & Johnson vaccines donated by the United States Government, to be channeled to neighboring border states. with the American Union.

He emphasized that “it is time to convince the United States to open the border,” for which he anticipated having issued instructions to the head of the Ministry of Foreign Affairs, Marcelo Ebrard Casaubón, to engage in talks with the governor of California, Gavin Newsom, and the authorities of the US federal government, to soon reopen this border.