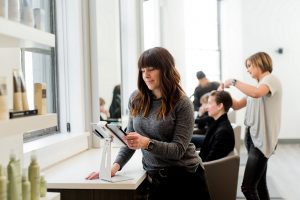 May is Small Business Month as the country celebrates the work of those that dare to open a business and create jobs for the community.

The week of May 16-20 has also been designated as National Small Business Week, as coordinated by the U.S. Small Business Administration. During that week, a conference is being held in Washington, D.C. which will feature lectures, events, and speakers to educate, inspire, and highlight some amazing small business owners.

According to “The Family Business Review”, “there are approximately seventeen million sole-proprietorship in the US. It can be argued that a sole-proprietorship (an unincorporated business owned by a single person) is a type of family business” and “there are twenty-two million small businesses (fewer than five hundred employees) in the US and approximately 14,000 big businesses”.

The U.S. Small Business Administration has found small businesses have created two-thirds of net new private-sector jobs in the US since 2007. Local businesses provide competition to each other and also challenge corporate giants. Of the 5,369,068 employer firms in 1995, 78.8 percent had fewer than ten employees, and 99.7 percent had fewer than five hundred employees.

Several organizations in the United States also provide help for the small business sector, such as the Internal Revenue Service’s Small Business and Self-Employed One-Stop Resource. The Small Business Administration (SBA) runs several loan programs that may help a small business secure loans. In these programs, the SBA guarantees a portion of the loan to the issuing bank, and thus, relieves the bank of some of the risk of extending the loan to a small business. The SBA also requires business owners to pledge personal assets and sign as a personal guarantee for the loan.