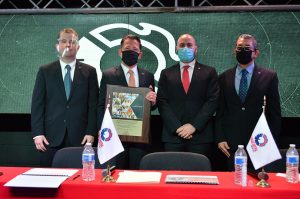 Alberto Sánchez Torres was elected President of the National Chamber of the Transformation Industry (CANACINTRA) Mexicali, in the 76th Virtual Ordinary Annual Assembly that was held on Feb. 12.

CANACINTRA partners gave their support to Sánchez Torres, who will lead the institution’s work for the period 2021-2022, after José Eugenio Lagarde Amaya’s 2 years and 3 months at the head of the business organization.

To safeguard the health of all members, as well as to continue to respect the protocols and indications that the health authorities have reiterated, the event was held virtually as CANACINTRA members voted in unity to support the reorganization.

In his speech, Sánchez Torres recalled that in May 2020 Lagarde Amaya announced the end of his mandate at the head of the Chamber, entering as acting President, by the statutes of the Institution and derived from the health emergency, being the first Vice President of the Board of Directors, for which he assumed the position with a high sense of responsibility and willingness to continue leading and leading all the efforts of the body.

During his speech as President-elect, he mentioned: “Without a doubt, 2020 was a complex year for everyone, characterized by uncertainty and by constant changes in public policies, emanating from the 3 levels of government, which seem not to be projected to promote competitiveness in our companies and they have become great barriers for those of us who invest, generate employment and benefit the community. “

In addition to the above, the leader of the business community took the opportunity to thank the associates for the trust they provided to formally assume the Presidency of CANACINTRA Mexicali, as well as expressing their commitment and enthusiasm at the head of the Organization as well as presenting the members of the new Board of Directors of Canacintra Mexicali.

We will continue working, he said, in favor of the competitiveness of our industry and the productive sector, according to 10 strategic axes that represent the most important issues for development such as energy, water, health and environment, infrastructure for development, education, subcontracting and supply, entrepreneurship, innovation and technology, agricultural development and the strengthening of the regional industrial block of CANACINTRA.

“Entrepreneurs are and will continue to be the spark plug that generates benefits and quality of life for Mexicans, we will continue working every day in Baja California and Mexicali,” he concluded.