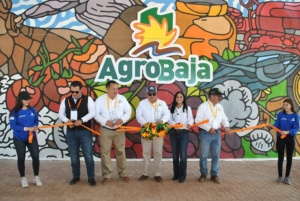 The biggest Agricultural event in Mexico took place as the 20th annual AgroBaja brought thousands of business people together in the three-day event.

From early morning until sundown, thousands of people arrived at AgroBaja to meet face to face with business people, eat delicious food, try the best wine in the region, or have a good time with the music of a local band. Whatever the reason for going is, AgroBaja is an experience that one comes once a year.

AgroBaja held a three-day expo from March 5th to March 7, 2020, at the Campo AgroBaja in Mexicali, Mexico. During the last two decades, AgroBaja has been a showcase for major agro-industrial companies in the country, seeing growing businesses that are now export example, were supported by the team AgroBaja, found channels of growth needed by companies.

This event has positioned itself as the most important platform nationwide where products and services are exhibited, promoted and marketed; agricultural, livestock, fishing and aquaculture, in order to strengthen the country’s productive chain.

Year after year the list of exhibitors all of Mexico and other countries is increasing by reaching 683 exhibitors and more than 55,000 visitors in its 2019 edition.

With 20 years of experience, AgroBaja has become the showcase and meeting point for producers, suppliers, and providers of major national and international services with the intention of promoting the development of the agri-food sector,

The main products and services that are found during the three days are agriculture, beekeeping, livestock, fishing, aquaculture, horticulture, agro-industry, machinery, alternate energies, food products, seeds, mechanical metal among others.