A Positive Vision for the Border Wall 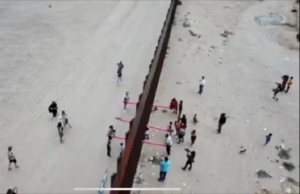 The border barrier between Mexico and the U.S. means the division of two countries but also the opportunity to make something fun out of it for all.

Architect Ronald Rael took pink teeter-totters to the U.S.-Mexico border fence in New Mexico, wanting people on both sides of the wall feel connected to each other for a few hours.

Suddenly, the fence became the Teeter-Totter’s place of fun as children and families from both sides of the border. Rael worked on the teeter-totters for six months cleaning them up and getting it ready. Little did he know that this moment would go viral, it became a statement on how the border can be transformed into something positive.

This activity goes in line with Rael’s book that talks about the border wall and how to modify it for economic prosperity.

In his book titled, Border wall as Architecture, Rael brings an artistic and intellectual re-examination of what the physical barrier that divides the United States of America from the United Mexican States is and could be. It is both a protest against the wall and a projection about its future.

Through a series of propositions suggesting that the nearly seven hundred miles of wall is an opportunity for economic and social development along the border that encourages its conceptual and physical dismantling, the book takes readers on a journey along a wall that cuts through a “third nation”—the Divided States of America.

Coupled with these real-life accounts are counterproposals for the wall, created by Rael’s studio, that reimagine, hyperbolize, or question the wall and its construction, cost, performance, and meaning. Rael proposes that despite the intended use of the wall, which is to keep people out and away, the wall is instead an attractor, engaging both sides in a common dialogue.