A new trade agreement is reached between Mexico, Canada and the United States

The economies of North America economies celebrate for reaching a new agreement.

The uncertainty came to an end on Sunday night at hours from the deadline and Canadian and US negotiators reached an agreement on the reform of the North American Free Trade Agreement (NAFTA).

“The new North American trade agreement will be renamed the United States-Mexico-Canada Agreement (AEUMC), which will generate solid economic growth and greater trade.

This is great news for the economies of the 3 countries, “said Dr. Alejandro Díaz Bautista, an economist, national researcher at Conacyt and research professor at the Colegio de la Frontera Norte (El Colef).

“It’s a good day for Canada,” said Canadian Prime Minister Justin Trudeau. While the representative of Mexican President-elect, Andrés Manuel López Obrador, Jesus Seade, celebrated the news. For Canada, the pressure was great since the United States had already closed an agreement with Mexico. 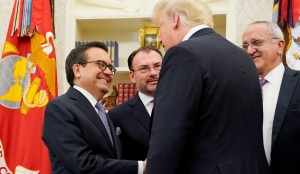 The negotiations were developed remotely, unlike other cycles of dialogues in which Canada’s Foreign Minister, Chrystia Freeland, had moved to Washington.

The expectation grew when Trudeau convened an emergency meeting of his cabinet on Sunday at 22:00 local time (02:00 a.m. GMT), two hours before the deadline set by Washington to close the renegotiation.

The announcement came after a full weekend of work by video conferencing between the negotiators to reach a last-minute agreement to modernize the trade agreement.

The new agreement must be ratified by Congress next year, and President Trump acknowledged on Monday the tough battle he could face.

The new pact of the three countries would require automakers to build a larger part of a car in North America and have workers with higher wages. That would be a relative victory for Detroit’s three automakers, which rely heavily on Canadian and Mexican factories for the US market and can now move forward with factory investments more clearly.

Automakers in Europe and Asia with plants in Canada and Mexico would also get more clarity, but provisions on local components and export limits could complicate operations.

The agreement would also be a victory for American auto workers and their unions. The new rules would require at least two-fifths of a vehicle that is eligible for duty-free trade in North America so that workers earn at least $16 per hour.

Meanwhile, US dairy producers got what they asked for with Canada, which agreed to abandon its complex “Class 7” quota and pricing system, which limited imports of certain dairy products from the United States. They are likely to win praise from legislators in the US milk-rich states, but it could have political ramifications in Canada.

At first, the new pact would include enforceable rules to dissuade countries from artificially weakening their exchange rates to obtain commercial advantages. While the United States, Canada, and Mexico are not regularly blamed for this type of infringement, the auto industry and its allies hope that the rules will be included in agreements with Asia.