A new beer is brewing for craft beer and rock lovers 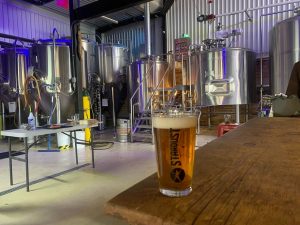 In the midst of a good atmosphere among partners, friends, allies, and the media, the first brewing of what will be the new promise of craft beer was held in the capital of Baja California: Stardust Beer.

Inspired by his love for rock music and by David Bowie and his renowned album released in 1972 “The Rise and Fall of Ziggy Stardust”, José Real, or better known as El “Chichi” Real, who has also been a fan of craft beer with an extensive experience in sales and public relations in the region’s beer industry, decided to baptize its new line of beers with the name “Stardust”, together with his partner Luis Rizzo, a brand that was officially registered in November 2020, and plans to offer four different styles this 2021, starting with a Stardust Pilsner (light) with 4.7 degrees of alcohol and a Stardust Stout (dark) with 6.7 degrees of alcohol which will be available in its launch event.

Stardust is being produced in collaboration with the brewmaster Victor Zuñiga, originally from Mexicali, and Cervecería Urbana, who have great equipment for the industrial production of craft beer and who were also pioneers among the Beer Gardens and Boutiques in the city.

The official launch of Stardust will be held at a public event at the traditional World Beer Bar “El Sume”, on Thursday, November 18, 2021, starting at 6:00 pm.