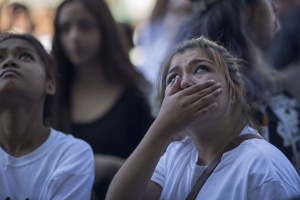 Washington, DC – In a second attempt to bypass standard legal process, the Trump administration asked the U.S. Supreme Court a few days ago to take up a case concerning the future of the Deferred Action for Childhood Arrivals (DACA) program before lower circuit courts finish review. This, after the Supreme Court slapped down a similar request in February and after the Department of Justice threatened a circuit court to move faster or else face this second request for exceptional Supreme Court review.

The Supreme Court rarely grants requests to review before lower courts complete their action.  According to its own rules, the Court will only grant such requests “upon a showing that the case is of such imperative public importance as to justify deviation from normal appellate practice and to require immediate determination in this Court.”

The following are reactions from Juan Escalante, a DACA recipient and Communications Manager at America’s Voice, and Ur Jaddou, the Director of DHS Watch and former USCIS Chief Counsel:

Election Day just passed, and the Trump Administration’s relentless attacks on immigrants and their families have not slowed down. A few days ago, the Department of Justice, headed by a fervent Trump enabler, took the exceptional step to rush DACA litigation to the Supreme Court.

By filing cert to expedite the dismantling of the DACA program, a move that would leave hundreds of thousands of young people exposed to deportation, the Department of Justice is seeking to leapfrog over the courts of appeals in New York, the District of Columbia, and California, in what can only be categorized a assault to our nation’s judicial process.

Make no mistake, what the Trump Administration is doing with DACA is another tool in their anti-immigrant arsenal to vilify immigrants with the intention of sowing even more fear and xenophobia across the nation.

Supreme Court rules are clear.  This extraordinary request for expeditious review before the circuit court completes its action will only be granted where there is “imperative public importance as to justify deviation from normal appellate practice.”  DACA has been in place for more than six years and has helped so many Dreamers, the economy, and so many communities.  Clearly, there is no reason to deviate from normal appellate practice which is why the Supreme Court already denied a similar request earlier this year.

But this is the Trump administration which has repeatedly shown its disdain for rules and the rule of law.  So it is not surprising that this administration has filed this second request one day before an election in a desperate attempt to rally voters and weeks after Trump and the Republican party rammed through one of the most controversial and politically-motivated Supreme Court justices.

America’s Voice  – Harnessing the power of American voices and American