A March Against Violence and Insecurity was Held in Mexicali 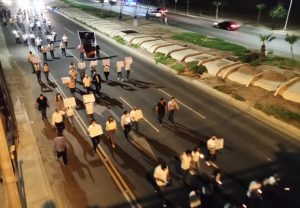 MEXICALI, B.C.- The march against insecurity was held yesterday afternoon, due to the rise in violence and insecurity rates in the capital of the state of Baja California. The march was called at 6:00 P.M. at Plaza de la Bandera, located in Río Nuevo, and attendees were asked to wear a white garment and bring a candle.

The tour began approximately an hour later, which ended at the State Attorney General’s Office, where a symbolic delivery and a petition to the said institution were read. Civil society was present, as well as holders of different positions demanding results from the three governing bodies, who carried banners, cards, canvases, and white candles.

Thus, the corresponding authorities were asked to do their job and to safeguard people’s lives, liberty, integrity, and property. They requested due attention and demanded an immediate response to the cases of the victims who have come forward to make a complaint. In this way, they mentioned, the lack of results and the impunity that derives in many cases.

On her part, Elba Calderón, representative of the Madres Unidas y Fuertes collective, shared that the case of the disappearance of her sister since November 2017 has not made any progress. She added that by findings of the group to which she belongs, in recent days they have found five bodies and of which details are not yet known.

Victor Hugo Medina, President of the Professional Lawyers Association of Mexicali en Pro de la Excelencia Jurídica A.C., said: “We all want the same thing, we want to live without fear, we want to live without violence and it is something that we all do shouting for justice.”  She added, the disappearances of fellow lawyers whose whereabouts are unknown and/or if there is progress in the investigations of said cases; she highlighted the murder of a president of the College, Juan José Castro Crespo. He mentioned, the decrease in resources that have been made to the police, for which he requested the incoming government, to grant them those that are required.}

Regarding the levels of violence and insecurity in the city, the elected mayor, Norma Bustamante Martínez, declared a few days ago that crime has exceeded the municipal police.