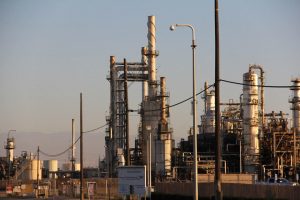 Voice in Solidarity Against Oil in Neighborhoods (VISIÓN) and the Central Valley Air Quality Coalition (CVAQ) invite you to A Just Transition for the San Joaquin Valley’s Economy and Oil Workers on Wednesday, April 21st at 10 AM. Panelists will discuss health impacts and other costs of oil extraction and production in Kern County, as well as the opportunities for and necessary components of a just transition for workers.

Nearly 7.5 million Californians sheltered-in-place live within 1 mile of an active oil or gas site. A majority of these residents are from low-income or Black, Indigenous, and Latinx communities – a testament to the reality of environmental racism in California today.

Science has shown a 2,500-foot setback distance between oil and gas drilling near homes, schools, hospitals, daycare facilities, and prisons is the bare minimum needed to protect people from the worst health outcomes of living near-constant oil and gas pollution: asthma, cancers, high-risk pregnancies, and now an increased risk for a serious case of COVID-19.

Compounding the public health crisis that the fossil fuel industry creates, non-union blue-collar workers, thousands of which are located here in Kern County, have lost their jobs to the whims of the declining oil market. On top of the usual challenges of unemployment, these laid-off workers now face higher water prices due to the tens of millions of gallons of water used in extraction that are too contaminated to re-enter our supply. The group knows that ignoring these problems will hurt workers, the economy, the most vital industries, and frontline communities. It’s time for a just transition that puts workers and communities first.

Right now, SB 467, a bill that will create common-sense health and safety setbacks and begin to limit the most dangerous fracking practices in the state, is making its way through the California Senate. Though 79% of Californians support a 2500’ buffer zone against oil operations and 74% of Californians say that elected officials should take action to protect their constituents from the health impacts associated with oil production, Big Oil spent 10 million dollars lobbying California officials in 2020, and it worked.

+ Time for Questions and Answers