Breaking News
Home / REGIONAL / A good that must be imitated

A good that must be imitated 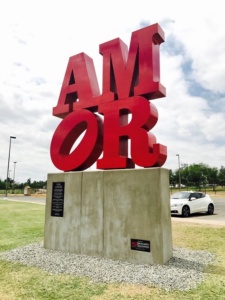 A few days ago, in the city of Mexicali, which is already the knowledge of all, it’s currently in a difficult financial situation, received a donation in the form of a sculpture that was placed in the city’s Plaza Centenario, as well as $200,000 pesos with the objective of making a contribution to the city for repairs of multiple potholes and paving.

In company of his wife, Margarita de Sánchez, the current Mayor Gustavo Sanchez thanked this effort made by private initiative to beautify the state capital, but which also fosters the pride of being Mexicalense.

The mayor said that this monument not only has a value for its visibility, but for the meaning  of the word “Love” which more than ever today needs to be kept in mind every day on every action we do, “so it is also the word Love, among many other things, an attitude, purposeful service to others, which drives us to think: what can I do for my family, my community, my State and my Country?”

At the end of the delivery ceremony he reiterated his recognition to the donor company, for their generosity and stressed that this is not the first time the company makes a contribution to the city.

However, far from being seen as an act of good faith, good will, or altruistic action which adds a little grain of sand to contribute to the welfare of all, to beautify the capital city and to contribute to what the current city council cannot do with its own resources, the company’s action, presided by current Senator, Victor Hermosillo has been critized and judged in a ruthless way by many local media outlets.

When reading that kind of negative notes I cannot but be saddened to realize the mediocre minds that exists in some of those who believe to have the power of speech and influence public opinion at their whim, and unfortunately for evil.

It is painful that behind a pen or a microphone you don’t hear emissions of positive comments that far from a destructive critic, could really generate in the population a feeling of empathy and desire to imitate the good that is done.

I think that far from seeing evil or negativity in the things and actions that surround us, we should have an attitude of solidarity and harmony so that our society, in the same sense, can fight with strength against those difficulties that come up on a daily basis in our community such as: violence, insecurity, poverty, and so many things that we can see every day in the streets.

Why not to say… I have X amount of money, I will donate. Or, why not say… I have a profitable company and I can contribute the same or more of what has been donated so that my city can better its aspect and the streets can have more security when walking through them.

Finally, I think that if you cannot imitate the good action and help financially, but you could do so with a pen, a microphone or a keyboard, you should at least try to convey through words the goodwill that we can all have so that our community gets motivated to imitate those good actions that are done and our cities can become a better place to live.