A Day Without Women 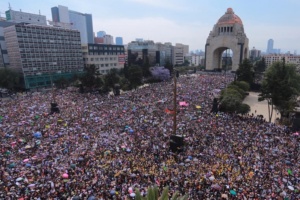 Women are tired of violence against them in Mexico, many of them will “disappear” in hopes their silence is loud and clear.

On March 9, women across Mexico will not go to work, take their children to school, use social media, or go grocery shopping. They are also urging men to be allies and help women on that day. The aim is to give visibility to the role women have in Mexico and to make a radical statement against femicide, misogyny, and inequality.

This year’s International Women’s Day comes on the eve of a planned “women’s strike”  this week. With a trending hashtag of #UnDiaSinNosotras (A Day Without Us), the movement hopes to let the government know that they will not tolerate any more gender violence.

Organized by feminist activists, the strike comes in the wake of intensifying protests and demands for government actions against the often grisly murders of women in the country.

One case was the murder of Ingrid Escamilla, 25, who was skinned and disemboweled. Another tragic case was that of Fátima Cecilia Aldrighett, 7, who was kidnapped after school on February 11. Her raped and tortured body was discovered on February 15.

According to published reports, 10 Mexican women are killed daily with more than 3,800 killed last year alone.

Mexican President Andres Manuel Lopez Obrador has questioned the strike. He accused the movement of being a front set up by his “conservative” opponents for nefarious reasons and expressed concern for the doors and walls spray-painted by the protesters rather than focusing on the movement’s urgent demands.