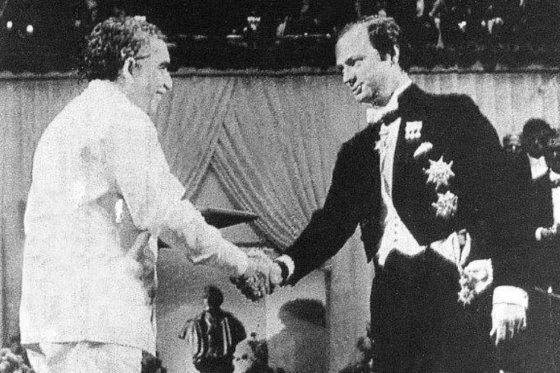 The Nobel Prize Award in Literature – 1982

Gabriel Jose Garcia Marquez, the most eminent Latin American writer, was born in Aracataca, a small town near the Caribbean coast of Colombia. One of sixteen children of an impoverished telegraph operator, the young writer was left to be raised by his maternal grandparents. This superstitious couple lived in “an enormous house full of ghosts” and enjoyed telling their grandson the local legends and history of the town—an experience that shaped the sensitivity of the future author of One Hundred Years of Solitude. Garcia Marquez later claimed that he had learned everything important in his life by the age of eight when he rejoined his parents in the suburbs of Bogota, the nation’s capital. He began writing by drawing cartoons in his Jesuit High School. In 1947 he entered Bogota’s National University to study law but spent much of his time writing and soon published his first story. (Over the five next years fifteen short stories appeared in local newspapers). In 1949 during a national political crisis, he moved to Cartagena ostensibly to continue his legal studies, but within a year he had quit school for journalism. During this formative years Garcia Marquez read widely, but he was most deeply influenced by Franz Kafka, who helped shape his style, and William Faulkner, who provided an example of a regional writer of international importance. “When I first read Faulkner,” Garcia Marquez later commented, “I thought: I must become a writer.”

In 1955 Garcia Marquez published his first novel, Leaf Storm. (This short novel appeared in English in 1972 along with half a dozen early stories, including “A Very Old Man with Enormous Wings”). His second novel, No One Writes to the Colonel, appeared in 1961 by which time the author had left Colombia and lived abroad in Rome, Paris, New York, Caracas, and Mexico City. Although never a member of the Communist Party, Garcia Marquez was a committed leftist whose political idealism was deeply engaged by the Cuban Revolution. From 1959 t0 1961 he even worked for Cuba’s press agency. In 1962 he published the novel In Evil Hour and his first collection of short stories, Big Mama’s Funeral. For the next few years he wrote almost no fiction, and in 1965 he went into seclusion to work on a major novel.

In 1967 One Hundred Years of Solitude, Garcia Marquez’s masterpiece, was published in Buenos Aires. The novel, which traces a Colombian family through six generations, almost immediately gained international acclaim. Called by the Chilean poet Pablo Neruda “the greatest revelation in the Spanish language since Don Quixote,” the novel eventually sold more than twelve million copies in thirty languages and was the central work responsible for his winning the 1982 Nobel Prize in literature. His other novels include The Autumn of the Patriarch (1975), Chronicles of a Death Foretold (1981), Love in the Time of Cholera (1985), and The General in His Labyrinth (1989). His Collected Stories appeared in 1985, and Strange Pilgrims, a book of a dozen new stories, was published in 1995. Much of Garcia Marquez latest writing was non-fiction, including News of a Kidnapping (1997), a startling account of a Colombian drug lord’s brutal standoff with police. In 2002, García Márquez published the memoir Vivir para Contarla, the first of a projected three-volume autobiography. Edith Grossman’s English translation, Living to Tell the Tale (2003).  October 2004 brought the publication of a novel, Memories of My Melancholy Whores (Memoria de mis putas tristes), a love story that follows the romance of a 90-year-old man and a pubescent concubine. Memories of My Melancholy Whores caused controversy in Iran, where it was banned after an initial 5,000 copies were printed and sold. He spent his final days in Mexico City. García Márquez died of pneumonia at the age of 87 on April 17th, 2014 in Mexico City.

Garcia Marquez was the most celebrated practitioner of Magic Realism (realismo mágico), a term first coined in 1949 by the Cuban novelist Alejo Carpentier to describe the matter of fact combination of the fantastic and every day in Latin American fiction. About the same time it was also used by European critics to describe a similar trend in postwar German fiction exemplified by novels like Gunter Grass’s The Tin Drum (1959). (German art critic Franz Roh had employed the same term in 1925, but he applied it only to painting). Magic Realism has now become the standard name for a major trend in contemporary fiction that stretches from Latin American works like Gabriel Garcia Marquez’s One Hundred Years of Solitude to norteamericana novels like Mark Helprin’s Winter’s Tale (1983) and Asian Works like Salman Rushdies’s Midnight’s Children (1981). In all cases the tale refers to the tendency among contemporary fiction writers to mix the magical and the mundane in an overall context of realistic narration. If the term “Magic Realism” is relatively new, what it describes has been around since the early development of the novel and short story as modern literary forms. One finds precedents in Gogol, Dickens, Balzac, Dostoyevsky, Maupassant, Kafka, Calvino, Cheever, Singer and others. Seen from a historical perspective, therefore, Magic Realism is a vital contemporary manifestation of a venerable fictive impulse.

As a young law student, Garcia Marquez read Kafka’s The Metamorphosis. It proved a decisive encounter, and the influence is not hard to observe in the early stories, which so often present bizarre incidents unfolding in ordinary circumstances. If Kafka reinvented the fable by placing it in the modern quotidian world, Garcia Marquez reset it in the unfamiliar landscape of the Third World. If Kafka made spiritual issues more mysterious by surrounding them with bureaucratic procedure, his Colombian follower changed our perception of Latin America by insisting that in this New World visionary romanticism was merely reportage. Garcia Marquez also has another crucial mentor closer at hand—the Argentine master Jorge Luis Borges. Only thirty years Garcia Marquez’s senior, Borges had quietly redrawn the imaginative boundaries of Latin American fiction. Almost single-handedly he had also rehabilitated the fantastic tale for serious fiction. Removing religion and the supernatural from any fixed ideology, he employed the mythology of Christianity, Judaism, Islam, and Confucianism as metaphysical figures. Paradoxically he expressed his sophisticated fictions in popular rather than experimental forms—the fable, the detective story, the supernatural tale, the gaucho legend. He was the first great postmodernist storyteller, and he found an eager apprentice in Garcia Marquez, who developed these innovative notions in different and usually more expansive forms.

Gabriel Garcia Marquez, one of the greatest writers of all times.