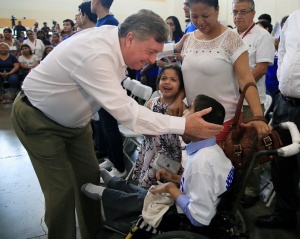 MEXICALI, BC.- In highlighting that during these 5 years of government, “we have governed with our hearts,” Baja California State Governor Francisco “Kiko” Vega de Lamadrid, stressed that health coverage currently reaches 98% of the population, unemployment rate was reduced to 2.4% and in terms of living standards, poverty and extreme poverty have been reduced in an important way, this took place at the first community meeting, over the framework of the 5th Government State of the State Address.

In an event held this Wednesday, August 1st,  at the Arts Center (CEART) of Mexicali, Governor Kiko Vega, abounded that by ruling with the heart as he has done it in the Administration he currently heads, strength is achieved which identifies Baja Californians who have overcome many difficulties to get ahead and achieve the development of this land of opportunities as it is Baja California.

He indicated that one of the commitments was to lead a more austere government, achieving that during these 5 years with important savings of almost 25 million pesos, resources that have been allocated to social work, “these are the facts and the results that speak of this effort from the State Government, “he said.

In this regard, the Secretary of Social Development, Alfonso Alvarez Juan, said that one of the first results is to generate opportunities for Baja Californians to be better every day and to have opportunities to reach a better life standard, taking the largest possible population out of poverty and extreme poverty, for which there are offices with actions, programs, and services that contribute to this goal.

In sports, he highlighted the hundreds of medals obtained by young Baja Californians in different national and international competitions in different disciplines, becoming a model for other young people; and the construction of 64 sports spaces built in the State, 17 of them in Mexicali.

The state official added that with the various social programs, 9 million 620 thousand pesos were invested in transportation for families, 7 thousand 723 transport cards were granted for older adults, 2 million 930 thousand services and attention to the communities, 15 thousand support temporary employment, 2 thousand 130 support to productive projects with an investment of 35 million pesos, the delivery of 35 thousand cards “Your Energy” this 2018, benefiting so far during the administration about 175 thousand families.

In social works there was an investment of 130 million pesos, Associations of Civil Society of all the State properly formed, also received support for 733 million pesos; 94 thousand Bosses Working Mothers; 45 thousand people with disabilities and for the dignity of 34 thousand homes, a resource of 92.5 million pesos was contributed, among many other actions.

On the other hand, the Secretary of Health in the State, Guillermo Trejo Dozal, assured that in Baja California the 4th Constitutional Amendment is fulfilled which is to provide health services to all citizens, with more than 3 million 800 Baja Californians who are enjoying this right.

He indicated that every year, 1 million 300 consultations are provided, 102 transplants have been performed, 49 of cornea and 53 of the kidney, and 38 heart surgeries both in the General Hospital of Mexicali and at Issstecali.

He said that by next October, the Tijuana Mother and Child Hospital will be put into operation, after the authorization of 233 million pesos for the conclusion of the hospital, which will come to depressurize the gynecological-obstetric and neonatal services that people go to in the General Hospital of that city.

Subsequently, the President of DIF Baja California, Mrs. Brenda Ruacho de Vega, recalled that there are 43 programs and 19 additional topics that address the vulnerability of Baja Californians, noting that with the reform of the Civil Registry Law, it can be assured that to date there is no child without an identity, because the program “No more invisible children” was implemented, unique in the country, which guarantees that every child born in Baja California will have their birth certificate.

She mentioned that with free mobile applications, in which the State is also spearheading, such as: “Speak for them” and those that are about to enter into operation “Por ellos” and “No te adelantes”, she seeks to protect children and women from acts of violence, as well as informing young people about the issue of sexuality so that they have appropriate guidance.

Finally, on behalf of the community, Mrs. Patricia Viridiana Franco Medina, thanked the Governor Vega de Lamadrid because his state administration has provided so much support to society, as the services she receives with her family in the Health Centers to stay healthy, and the option to participate in workshops that allow them to obtain their own resources to improve their living standard, and scholarships for their youngest children.

Likewise, Governor Kiko Vega, concluded by assuring that he heads an Administration with seriousness and honesty in favor of a society that has distinguished itself for being good, hard-working and committed to join the actions to prosper and have a better life standard, he said. “Every day we go for more, for that, I thank everyone for their commitment and willingness to move forward in this State of opportunities”.