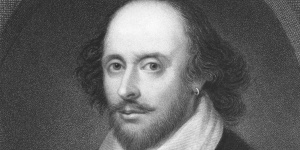 In 1616 (Old Style calendar), in the 23rd day of April, a day like today the English poet and dramatist William Shakespeare died in Stratford-upon-Avon, 401 years ago.

According to tradition, the great English dramatist and poet William Shakespeare is born in Stratford-on-Avon on April 23, 1564. It is impossible to be certain the exact day on which he was born, but church records show that he was baptized on April 26, and three days was a customary…

Since William Shakespeare lived more than 400 years ago, and many records from that time are lost or never existed in the first place, we don’t know everything about his life. For example, we know that he was baptized in Stratford-upon-Avon, 100 miles northwest of London, on April 26, 1564. But we don’t know his exact birthdate, which must have been a few days earlier.

We do know that Shakespeare’s life revolved around two locations: Stratford and London. He grew up, had a family, and bought property in Stratford, but he worked in London, the center of English theater. As an actor, a playwright, and a partner in a leading acting company, he became both prosperous and well-known. Even without knowing everything about his life, fans of Shakespeare have imagined and reimagined him according to their own tastes.

Shakespeare’s father was probably a common tradesman. He became an alderman and bailiff in Stratford-upon-Avon, and Shakespeare was baptized in the town on April 26, 1564. At age 18, Shakespeare married Anne Hathaway, and the couple had a daughter in 1583 and twins in 1585. Sometime later, Shakespeare set off for London to become an actor and by 1592 was well established in London’s theatrical world as both a performer and a playwright. His earliest plays, including The Comedy of Errors and The Taming of the Shrew, were written in the early 1590s. Later in the decade, he wrote tragedies such as Romeo and Juliet (1594-1595) and comedies including The Merchant of Venice (1596-1597). His greatest tragedies were written after 1600, including Hamlet (1600-01), Othello (1604-05), King Lear (1605-06), and Macbeth (1605-1606).

He became a member of the popular theater group the Lord Chamberlain’s Men, who later became the King’s Men. The group built and operated the famous Globe Theater in 1599. Shakespeare ultimately became a major shareholder in the troupe and earned enough money to buy a large house in Stratford in 1597. He retired to Stratford in 1610, where he wrote his last plays, including The Tempest (1611) and The Winter’s Tale (1610-11). Meanwhile, he had written more than 100 sonnets, which were published in 1609. Although pirated versions of Titus Andronicus, Romeo and Juliet and some other plays were published during Shakespeare’s lifetime, no definitive collection of his works was published until after his death. In 1623, two members of Shakespeare’s troupe collected the plays and printed what is now called the First Folio (1623).