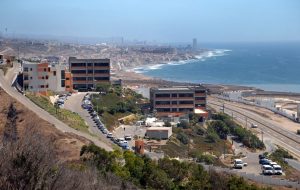 The Colef celebrated 39 years of foundation. The origin of El Colegio de la Frontera Norte (El Colef) dates back to August 6, 1982, under the name Centro de Estudios Fronterizos del Norte de México (CEFNOMEX), which was founded by Dr. Jorge A. Bustamante (1938-2021), as a response to the lack of data produced in Mexico that would reflect the particularities of the geographic space of the northern border and its dynamics with the United States.

Since its creation, El Colef has generated research from a binational perspective through border studies, since the data on economic, social, environmental and cultural development came from sources in the United States. “The Northern Border College (Colef) generates scientific knowledge about the regional phenomena of the border between Mexico and the United States with a comprehensive and multidisciplinary perspective,” said Dr. Alejandro Díaz-Bautista, international economist and research professor at Colef.

The also researcher in the Department of Economic Studies and professor of the Master’s Degree in Applied Economics (MEA) at El Colef mentions that this institution trains high-level scientific and professional cadres through postgraduate courses and continuous training programs, in addition to being linked to the academic, social and governmental fields for the dissemination of knowledge and promotion of development initiatives for the border region and the entire country.

The Colef is recognized for its activities in research and teaching of high academic level and where, in addition to scientific knowledge, works from a cross-border perspective with international recognition. The research carried out at El Colef is structured around lines of research taken up by academic departments and regional general directorates.

The Department of Economic Studies (DEE) of El Colef works as an academic unit with the objective of applied research, teaching activities and social projection from its specialty, economics, trying to link them with the critical and constructive exercise of analysis of the reality of the Mexico-United States border.

Diverse are the challenges that are glimpsed in the short, medium and long term, and for which it is necessary to have tools to face them and promote cooperation between diverse actors of the society. From the academy, El Colegio de la Frontera Norte (El Colef), will continue to contribute to the formation and consolidation of scientific knowledge that contributes to the well-being of the population on the United States-Mexico border and addresses the various dynamics that occur beyond the country borders.