24 PATIENTS HAVE RECOVERED FROM COVID-19 IN BAJA CALIFORNIA 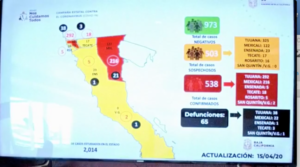 The Baja California government announced that there are 24 people recovered from the COVID-19 contagion, but for this reason, the population should not let their guard down before the imminent threat of the pandemic whose numbers have increased exponentially.

Governor Jaime Bonilla commented in his morning video-conference: “We want to tell the community that there are not only deaths but also people who have positively recovered from the coronavirus”, these are patients who remained “quarantined” at home during the last weeks, supervised by the State Health Secretary, although they will continue under medical observation and epidemiological follow-up.

In this sense, the Health Secretary, Dr. Alonso Óscar Pérez Rico, explained that the first recovered patient corresponds to a 71-year-old person; and reminded the population that there is no specific treatment to counteract the virus and that the best way to combat it is healthy distancing to avoid contagion.

“At the moment we have enough beds, ventilators, hospitals, and equipment for medical personnel, but at the national level, Baja California is completely marked in red, meaning that all of its municipalities have the virus,” he explained.

The Secretary of Health reported that to date in Baja California there are 538 cases that “tested positive” (Tijuana 292, Mexicali 216, Ensenada 5, Playas de Rosarito 5, Tecate 18 and San Quintín / Vicente Guerrero 2).

The Ministry of Health in the State reports that the age groups most affected by coronavirus in the region are 45 to 49 years old (working class). In this range, there are 76 outpatients and 22 hospitalized patients.

He also detailed that the “Government in March” recently acquired 8 fans that are destined for the General Hospital of Tijuana, and it is expected that more equipment of this type will arrive, which is distributed by the Federal government throughout the country. For its part, the Mexican Institute of Social Security (IMSS) in Baja California, rented 14 ventilators for its medical units.

Alonso Pérez Rico, informed that the “National Day of Healthy Distance” will be extended; in states where a decrease in cases and deaths is reported, it will end in mid-May; meanwhile, in those entities with active dispersion, it is projected to be until May 30.