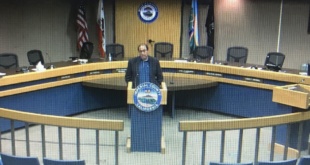 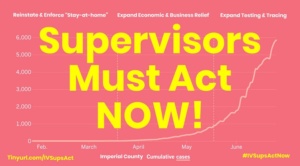 Reacting to the Governor’s recommendation and feeling a lack of commitment from County officials, a petition is circulating asking the governor to revert the valley back to Stage 1 of the recovery plan.

Gov. Gavin Newsom’s announcement on June 26 asking Imperial County to return to a Stay-At-Home order sparked anger and concern among many residents that have questioned the actions of County officials during this pandemic. Newsom said that a return to the Stay-At-Home order can help reduce the positivity rates in the valley.

A petition began circulating on social media supporting the Governor’s call to return to Stage 1 in the Roadmap to Recovery. In this stage, only essential businesses and services can operate.

“Supervisors keep saying they have done everything they can and blame community members for rising cases. Supervisors say they already have a stay-at-home order, yet have allowed non-essential businesses to open, and spent the last two weeks trying to skip ahead to reopening ahead of state guidelines. Supervisors need to take responsibility for lax enforcement, doing the bare minimum, and for sending mixed signals with their efforts to speed up reopening!” the petition letter read.

The petitioners say how the county board had a meeting and took no action simply stating they would need to talk to the Governor’s office.

“Every day of county inaction brings often over 100 new cases and new deaths.” They argued.

They also criticized the local business advocacy groups such as the Imperial Chamber of Commerce and the IV Recovery Task Force.

“We need your support since special interests like the Business Recovery Task Force and Imperial Chamber of Commerce have called on the Supervisors to reject the Governor’s request and “stay the course” and “reopen Imperial County.”

“Today’s recommended action by the Governor is, in many cases, a devastating turn of events for our businesses who have worked hard over the last several months to implement proper safety precautions for a safe working environment. We understand the struggle our businesses continue to face, and we stand ready to assist the local businesses while they navigate this challenging time,” said Katie Luna, Task Force Coordinator.

It was this group that opposed the county’s letter to the Governor to move the state to Stage 2B. Their petition gathered 1,900 signatures, according to the press release. The coalition is asking the county to work with the community and find ways to overcome this pandemic by addressing public transit issues, more testing sites, economic relief, etc.

“We are optimistic that Gov. Newsom’s clear directive will allow for focus and collaboration to get Imperial County’s outbreak under control.”

The link to the petition can be found here: