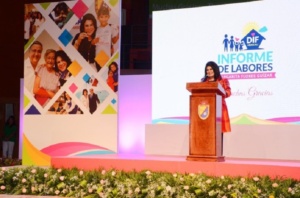 Mexicali B.C. – Before authorities of the three orders of government, representatives of non-profit associations, businessmen, former first ladies and special guests, Ms. Margarita Flores de Sánchez, President of the Municipal DIF Board of Trustees, presented her last work report where she highlighted the achievements obtained during 3 Years of hard work.

Through a video, the goals in which Flores de Sánchez worked from day one for the benefit of Mexicali families were shown; through it she also informed about the creation of programs such as the delivery of itinerant breakfasts to people in street situation, through which 55 thousand 700 breakfasts were delivered since its creation in October 2017.

Likewise, implementation of scholarships to high school students, university students and people in a vulnerable situation, which for the first time were added to the register of incentives granted by DIF to the population, was highlighted. With great enthusiasm, the President of DIF specially mentioned about the construction of two major projects that she affirms, were a dream at the beginning of the municipal administration and that today are a reality thanks to the support of the Mayor, Mr. Gustavo Sánchez, the City Council and all those who joined these projects; the first one, the construction of first cancer stay in the city, the Madre de Guadalupe ranch, where cancer patients have a place to spend their treatment days in a pleasant and caring environment.

And on the other hand, the Peregrino Hostel, where since December 2018, about 20,000 people who previously wandered the streets of the city and who now receive accommodation, food, talks, workshops and especially a roof where shelter from extreme temperatures in the city.

The first lady took the opportunity to thank all the people who, during these three years, helped DIF in the different projects that were undertaken, to the non-profit associations for their effort and coordination in achieving the community welfare, to the members of the DIF Mexicali board of trustees, business chambers, the media, the Mexicali City Council and the DIF team that were always present in the communities.

She also thanked her children for the support and patience, “you were our motivation and your participation was key in this great project that we carried out together,” she added. She especially dedicated a few words to Mr. Gustavo Sánchez and thanked him for supporting the projects that were created for the benefit of hundreds of people living in a vulnerable situation.

“I leave happy, happy for their hugs, for their words that fed me to continue working, for their gaze, for our commitments,” she said.