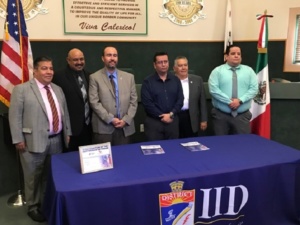 A historic partnership began as two important groups in the energy sector joined forces in a cross-border effort to serve the public good while strengthening relations.

In a ceremony held at the Fernando “Nene” Torres Council Chambers at the Calexico City Hall Sept. 5, Imperial Irrigation District and Centro Nacional de Control de Energía sealed a partnership that has been long in the making.

IID, CENACE and Comisión Federal de Electricidad have been working on a joint project whereby, under this partnership, IID has been delivering electrical energy to help sustain part of the Mexicali Valley’s energy demand.

“This agreement made with our neighboring partner will allow us to supply energy to industrial and residential neighborhoods in a region of Mexicali that is rapidly expanding,” said Erik Ortega, IID Board President.

Ortega emphasized that while they are looking forward to working with their Mexican counterparts, IID’s own electric grid and customers will remain the district’s top priority.

“The additional energy capacity of IID allows to supply this service to CENACE,” Ortega added.

In this agreement, both partners agreed to cover IID’s expenses and ancillary services for energy.

Luis Eduardo Quirazco, Regional Control Manager of CENACE Baja California, said this agreement will be crucial for the operation of the CENACE electrical system.

“The relationship has been there for many years, we were able to establish a better relationship and do extensive work by both parts to make this physical power flow that will help many people,” Quirazo said.

Under existing presidential permit that the IID holds with the U.S. Department of Energy, IID has been able to implement a remedial action plan that has allowed the district to provide a continuous flow of electrical energy to a growing, yet under-deserved area, south of the border that has required added capacity to get through the warm summer months.

The parties commenced physical flow of power in June, utilizing an existing intertie at IID’s Bravo Substation. The current agreement allows the district to provide up to 27 megawatts to Mexico, which is not a significant part of IID’s power load but has greatly help its neighbors in Mexico.