Initiative to Create California-Mexico Commission Moves Forward in the Legislature 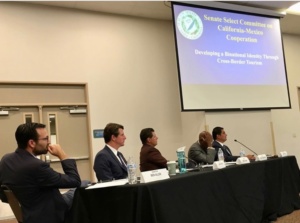 The creation of the California-Mexico Commission continues through the legislative process in Sacramento in hopes to be signed by the Governor.

California State Senator Ben Hueso introduced Senate Bill 558 to create a California-Mexico Commission. This group would deputize members of the public into commissioner roles so that they can create a strategy for California-Mexico relations and create community-driven policy recommendations.

The bill recently cleared the Appropriations Committee, and it now requires approval by the Assembly. It will then come back to the Senate for a vote since the bill was amended.

Assuming it passes both houses of the Legislature, it will be sent to the Governor for his signature or veto by the Oct 13 deadline.

Senator Hueso said that California shares over 140 miles of the southern border with Mexico, and the flow of goods and people across the border have been critical to California’s success as the fifth-largest economy.

“Our close proximity and shared values have resulted in one of the strongest economic, cultural, and social regions in the world. Nowhere is this relationship stronger than when discussing the economic realities of the California-Mexico border region,” Hueso told Beyond Borders Gazette.

“Today, trade with Mexico supports 566,000 jobs in California. However, the benefits of a partnership with Mexico are not yet fully realized. We are far behind other states, especially other border states. Texas’ exports to Mexico outdid ours by more than $70 billion. Establishing a commission on California-Mexico affairs can help us activate the full set of benefits that come with a strong California-Mexico partnership,” Hueso stated.