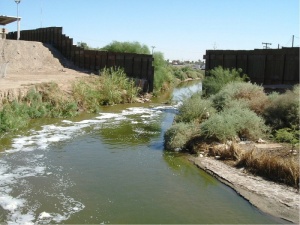 The Imperial County Board of Supervisors will request the International Boundary and Water Commission immediate action by the U.S. and Mexican government to address ongoing deficiencies in the Mexicali sewage infrastructure deficiencies and resulting contamination of the New River and surrounding areas.

The Board of Supervisors gave direction at their Nov. 6 meeting to draft this letter asking the commission to take action on the constant raw sewage spills to the New River that have become increasingly frequent. The county argues that Mexicali’s aging sewage infrastructure is not only inadequate to accommodate current levels of municipal and industrial waste, but these facilities have not been renewed and continue to degrade.

The county stated in the letter that the bypass of raw sewage that gets into the New River brings harmful pathogens that are a risk to public health.

The county added that New River pollution goes all the way to the Salton Sea terminus. This is a concern for the county since there are efforts underway to implement the Salton Sea restoration plan.

Last year, Calexico, Imperial County, and Imperial Irrigation District signed a memorandum of understanding agreeing to contribute to the operation and maintenance costs for the New River Improvement Project once it is complete. The infrastructure project is designed to address the river’s long-standing pollution and related public health problems while enhancing the quality of life for local residents.

The water infrastructure project would address these problems by installing a trash screen just downstream from the Mexico border; piping polluted water away from Calexico to wetlands and aeration structures for remediation and replacing polluted water in the river channel with treated wastewater from the city’s treatment plant.